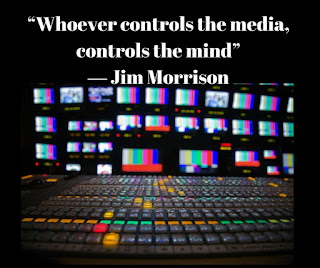 This is a quote from Jim Morrison. Applicable to all types of media, we will here take up how this applies to music and art.
When young and naïve, aspiring towards a career in music, say, one has a conception of a field of endeavor that abounds in creativity.
If one has had any brush with the professional end of things, however, a completely different picture begins to emerge; an awareness that music and art are among the most tightly controlled and suppressed areas of enterprise in all of human activity.
That is unless one has managed to remain beneath the proverbial rock all his life.
One way that the media controls music is through artificially created popularity. This is done through selective stat reporting.
It works like this;
For example, let us say the statistic is number of Christians in a given state and say that number is reported as ten thousand. Now say you survey ten thousand Christians and ask them the question ‘what is god?’
Well, you would get ten thousand different definitions of god. But you say ‘you believe in god, therefore you must be a Christian and they say ‘that’s right I must be a Christian.’
Now all the folks who were sitting on the fence say ‘well, we must be Christians too because that must be the right thing. Look at all the people who are Christians.’
The media insists that a person is only capable of liking one kind of music; that which they happen to be pushing at the time.
According to a survey that I’ve been running for close to ten years, using interviews on my own radio station and various social media, most people actually like multiple genres of music and a fair number secretly listen to ‘classical’ music despite the media’s insistence that this music no longer exists.
The media, driven by the record companies create a demand for what they are selling. They even go so far as to engineer bands and keep stables of pop musicians that they can readily plug into whatever projects they come up with.
This is how such unlikely pairings as Elton John and John Lennon came about.
Strange days indeed.
They ignore anything different or original because that would all be too hard to control and would lead to independent efforts springing up and making things difficult for them.
I suppose this is only disturbing if you believe that artists make an important contribution to culture and a stagnant state of the art leads to a downward spiral in society at large.


Again I will leave you to draw your own conclusions other than to observe that it’s been some time since we’ve heard about the Dawning of Aquarius or the assertion that we can change the world.
at September 23, 2018