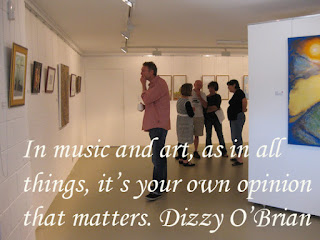 Now, more than ever, it’s your own opinion that matters, in this day and age when ‘popular opinion’ is shaped by the media to reflect favorably on what is being promoted. People are swayed by this illusion, else why would it be done in the first place?
Our ‘freedom of choice’ is ever narrowed down to a few things; one predominant musical genre and a hand full of artists representing it. On some pop radio stations, you can hear the entire program in a couple of days and one would think that artists like Jimi Hendrix only ever wrote two songs; “All Along The Watchtower” and “The Wind Cried Mary.”
Having an opinion about music and art begins with knowing what you like or don’t like. An honest assessment of who you are because one of the most fulfilling journeys you can take in music or art is self-discovery.
It doesn’t really matter if there are technical complexities or if the thing is simple, because the bottom line is; do YOU like it or not?
Sure the snobs will try and intimidate you and make you think you need a PHD to listen to music or look at a picture but take Bach, for example. I liked Bach when I was in first grade and I certainly had no idea that it was highly intellectual and complex music. I just liked it, so it’s possible to like something without taking a course on it.
Conversely, back when they played a lot of avant-garde music, if you didn’t like it, you were told that you just didn’t understand it. This didn’t turn out to be true as, the more I understood it, the less I liked it.


So you can start by just being honest with yourself about what you like and don’t like and not worry about anyone trying to make you wrong over it. When you identify things you like then you might start to find out more about them and then you can have informed opinions about the finer aspects of what it is you are enjoying.
at September 26, 2018