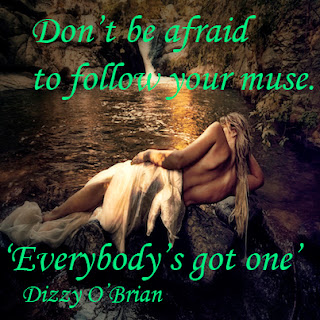 The concept of the muse goes way back to the time of the ancient Greeks. There were nine muses who were the daughters of Zeus and they represented the different branches of the Arts and Sciences. The muses would inspire or speak to people and assist them with their creative efforts.
There were two chief ways that an artist, poet or musician could get in contact with a muse. One way was to invoke the muse or call to it.
Writers of old would do this in the opening passages of their books, such as Homer did in The Odyssey;
“Sing to me of the man, Muse, the man of twists and turns driven time and again off course, once he had plundered the hallowed heights of Troy.” Homer, Book 1 of The Odyssey.  (Robert Fagles, translation 1996) For more information about the muses and their names, go to this Wikipedia article.
The other way of contacting a muse was to align one’s thoughts with the muse. Since the muses are goddesses, it seems reasonable to assume that one would have to fill their mind with very high-toned thoughts, much like the scene from Mary Poppins where everyone began to float into the air because they had filled themselves with such good humor.
This is, by the way, a fairly traditional method of contacting a god or spirit and is the way that a channel works; the person of channel brings their thought vibrations way up and the entity lowers theirs to meet them half way, so to speak.
In the original (Greek) definition of inspiration, it was a thought or idea that came from a god or spirit, it was preconscious, in other words; something that transcended the ordinary workings of the human mind.
There is also the idea that the average human mind has ‘limiters’ on it, which are ideas regarding the person's inability to do something better.

Email ThisBlogThis!Share to TwitterShare to FacebookShare to Pinterest
Labels: inspiration and music, muses, the muses