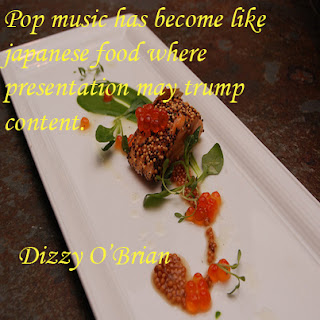 Nothing against Japanese food. Eat it all the time. Just ask my friends at Sushi Stop. Nothing against pop music, whatever that is. Find it interesting, however that ‘pop music’ continues to parallel so called classical music (or serious music or ‘fine music’ as Frank Zappa called it.)
Perhaps it’s the other way around. I would have to do a bit of careful research but I’m not going to.
Not needed.
You’ll have to excuse me because I’m going to toss a lot of these phony labels that don’t mean anything around.
What I mean is, what people think of as ‘Classical Music,’ didn’t just die a quick death at a given point. It sort of slithered off into the Avant-garde and, when people got tired of atonal music, (about three years before the Avant-garde) there came ‘minimalism,’
And what is ‘minimalism?’ you ask. Well, it’s music constructed of very short musical patterns that repeat and morph a bit but mainly repeat. Still confused? Let me see if I can give you an example. It’s like…
Well it’s like…Rap music. Yeah, that’s what it’s like. Rap and Hip Hop.
I was in a minimalist group for about a year and our parts consisted of a pattern (maybe four to eight notes of music) followed by something like ‘10X’, which meant to repeat that pattern ten times.
This was the most difficult thing about the music; remembering how many times you had repeated something. Any time I would mess up my count, I would tactfully be accused of ‘improvising’ and asked in a round about way to stick to the written page.
Oh no, I wasn’t improvising, I was screwing up.
Minimalism was popular for a while and I learned that someone had written a Minimalist Manifesto. He was a communist, so minimalism had to be used to forward that, of course.
But most interesting was that it said there was no ultimate evolutional musical style, which was something I said back before that when they were trying to cram serial music down our throats. So, given this, there should have been no ‘minimalist movement,’ but there was (go figure.)
It was like the ‘Life of Brian’ when he throws his shoe at them to try and get them to bugger off and they all become followers of ‘The Shoe.’
It was good they had this because anyone who didn’t dig minimalism could be told to go READ THE MANIFESTO! Just like anyone who didn’t like serial music could be told to go STUDY THE MATH.


Good thing this is not going on with pop music, it’s just too hip for anything like that and, of course, we all know if you don’t like it, you're just an uptight racist who is easily offended by violence and profanity, so loosen up, already!
at March 24, 2019