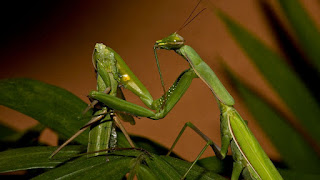 I recently came across an article in the High School Insider, which I gather is a section of the LA Times Online, about how students should avoid listening to music while studying.
This is rather interesting as you see quite a few articles about what music to exercise by and such and music will make you smarter, so you should listen to music when you study.
The article sites a study done by the Guardian saying that music, especially music with lyrics takes up space in the brain that can be used for processing information and memory.
I concur, only I tend to look at it this way; studying while trying to listen to music takes up space that could be used for processing the emotional content of the music. I don’t believe you should listen to music while doing other things, buying groceries, riding elevators, meditating, exercising, etc.
The one exception to this rule is making love. This is because of the well-known scientific datum that the female Praying Mantis rips the head off of the male Praying Mantis during intercourse.
And his performance improves.
Don’t ask me how anyone ever got this datum, but I read it on the Internet, so it must be true.
So, hopefully you are not using up a lot of space in your brain during sex so there will still be plenty left for processing music.
In general, as you can see however, I’m not a big fan of multitasking. The concept of multitasking and people who claim they can multitask are some of my pet peeves in this modern age we live.
Give me one thing and total immersion in and surrender to it, especially music. I don’t listen to music and read a book; I just read or just listen to music, one or the other. I don’t, strictly speaking, believe multitasking is possible; it sort of defies the definition of concentration, so one is not multitasking, one is just being dispersed.
So, definitely, study in quiet so you can concentrate.
at February 29, 2020 No comments: