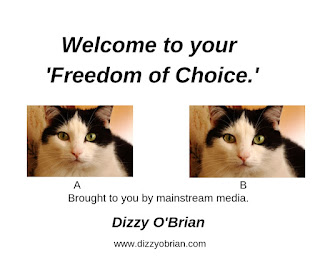 The question being, if you have the freedom to choose between a few things that are, for all practical purposes, the same, do you really have a freedom of choice? Once upon a time, there was but one Catholic Church and the service was in Latin and there was NO music.
No freedom of choice there. One couldn’t say ‘honey, let’s pop down to the new church on the corner and hear the service in German, so we’d know what the hell their saying, and maybe they’ll have some nice lute music.’
No, there was none of that. Of course, we’re talking about the Dark Ages.
Then Martin Luther thought he’d just translate the service into German, not change anything, mind you, and for that he was excommunicated.
So, as far as music went first you had the Church controlling things and then it sort of shifted over to Royalty and such, supporting music, so they had control and wanted mostly party music.
So, all the while the composers dreamt of being free and letting the public decide, so they began to publish the music and sell tickets to their concerts.
It wasn’t long before the music business reared its head and started deciding what the ‘public’ liked.
And today, the music business thinks it has this down to a science. They aren’t worried about what the public will like because that’s for them to decide.
They decide and call the tune. The media uses propaganda; thinly disguised as news to create whatever scene they choose.
This is why the music scene has not changed appreciably in the last forty years or so. I daresay this is probably why the classical tradition, which was barreling along, producing musical genius after musical genius came to a grinding halt not long after Beethoven. Some attribute it to the Age of Reason but a Beethoven surely could not function under the constraints of ‘popular demand,’ as defined by the business.
The composer Hector Berlioz literally ‘dumbed himself down’ enough to win a competition in France that would give him enough money to go off and write as he pleased.


So the ones that have been consistently bypassed in all of this is the public and the question remains; how do you like it?
at December 01, 2018