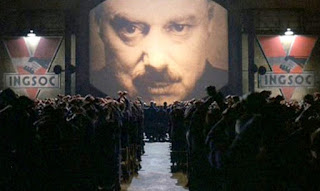 Some have pointed out how ‘social distancing’ is a divide and conquer tactic and I have made mention to how odd the names given to these things are. AIDS, for example; just whom does it aid? Now I know it’s an acronym for Acquired Immunity Deficiency Syndrome, but who acquired it?
Here we have ‘social distancing,’ not  ‘physical distancing.’ Why? Physical only has one more syllable in it.
But what is wanted is more than physical distancing. The pictures of the Italians with their wine glasses on the ends of large poles, clinking their glasses together in a toast from their balconies show that they understand. Of course they lived through Stalin.
It’s wanted that people should be less friendly and less able to communicate. They should fear the other person; they have a disease they are trying to give you. You are in competition with them for toilet paper.
Anyone who hasn’t read the book 1984 should do so, while they’re in lockdown. The book is about a man named Winston who is living in a totalitarian regime. The government is ‘Big Brother’ and he is watching you. History and the media are controlled. Virtues such as love are frowned upon.
Winston falls in love with a woman named Julia. They are found out and taken away.
The government tortures Winston to break him, so that he only loves and trusts Big Brother.
They force the ability of ‘double think’ on people, which is the ability to hold two contrary thoughts in their minds and believe both. (And have we not had an abundance of contrary thoughts from the media now?)
In the end, Winston breaks and tells them to torture Julia instead of him. Satisfied that he has finally lost all shred of humanity he is released.
We are even ‘social distancing’ on social media; everyone is polarizing into virulent and opposing factions.
If there was ever a time to come together, however, it is now.