The new music video is an instrumental track from the Tea With The Alien CD. This instrumental new age music is some pretty chill music. This new ambient electronic music is brought to you by Dizzy O'Brian.

This is a new classical fusion music video on Dizzy O'Brian's youtube music videos. This new music release is from the album of instrumental music called 4 Good Measure. This album contains classical music blended with pop music.
at March 17, 2021 No comments:

There can be no doubt that music parallels culture. One only has to look back through time to find the connection between music and the society of that time to see the connection, so it is certain that we have always had music as culture.

One can find a connection not only in the dancing of the time but also the fashion and even the very language used. Idioms and slang began noticeably appearing in the United States way back with the Beat Movement with words like ‘cool,’ ‘square,’ and ‘DaddyO.’

The fashion was very distinctive and identifying with black turtleneck sweaters and bangs. It was an artistic culture and people hung out in coffee shops, painting and composing poetry on the fly.

We follow it into the sixties with tie dye, bell bottoms, sex and drugs.

The real question, I suppose, is which came first; the chicken or the egg? Does music culture reflect changes already going on in society or is it a catalyst? An interesting question, since many musical artists in the sixties could actually read and did. There certainly seemed to be something going on, what with all the talk of revolution and such.

This brings up the connection of music and politics. We can certainly find music being used on both sides of the fence historically. Hitler tried to use music to serve his own ends, largely by twisting its interpretation and Stalin ran the media so that, if you got a bad review as a composer, you would likely be taken away during the night.

So the question is, if music as culture is just a reflection of what’s happening in society, why do we see such a ferocious effort historically to control it and censor it?

Why did record companies like Capitol Records close down all their divisions that handled different kinds of music and begin to just concentrate  on one type of music? What is the outcome, if music as culture is under other control.

Oh well, at least we can go to a concert whenever we feel like….oh shit.

Here it is! The Classical Fusion Music Playlist!

A growing collection of musical artists that bend existing musical genres to create new music. For example creating an alchemical mix of classical music and pop music, say. We can't describe it but we must, so let's call it classical fusion music. And here's a Spotify Playlist of these new music artists which keeps on growing just magically. CLICK HERE! 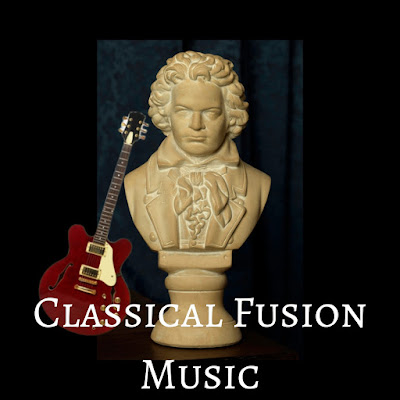 Dizzy O'Brian, producer of classical fusion music presents this new video, which is an ambient electric guitar music video called Mr. Suzuki. The music suggests a master of illusion, Mr. Suzuki, taking a stroll above a forest on a tightrope in the sky. Although a little dark ambient in some places, the work generally reflects the composer's happy classical fusion. To experience more classical fusion and get a free instant download of the composer's '4 Good Measure' album, CLICK HERE