If It Wasn't For New Music, We Would Still Be In The Dark Ages 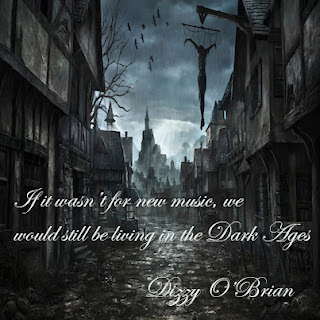 Did you ever wonder what the world would be like if new music didn’t exist? One thing you have to understand is that new music has a long history. Let’s just go back to the Dark Ages, for example. This is not so long ago, but it will do for the sake of our discussion. In the Dark Ages everything was under the control of a family called ‘The Church.’ The top dogs in The Church were the Popes and there were some really bad ones, like the Borgias, for example. Back in this time, if you stepped out of line or were suspected of saying anything out of line, you were quickly tried and executed by being stoned or burned at the stake. Music was mainly done in the church and consisted of monotone chanting of Latin biblical texts. There was no melody and no rhythm except that it fit the syllables of the text. There were no musical instruments allowed. This was because the Church was afraid that music with melody and rhythm would just be too stimulating for the lambs in its care.

Over a very long period of time, certain people got the idea that things were pretty suppressive and decided that something needed to be done. They started printing books and teaching people to read and musicians pushed to get music with melody and rhythm that was played on real instruments. New music became a tool in educating people and lifting them out of the apathy that they had been reduced to.

The way that the ruling class always maintains its place of power is making people believe that they are somehow better; that they are gods or have been chosen by god or they are just smarter, better people who know how to run things. The message that new music has always brought, down through the ages is; “Power to the people. Power to the people, right on!”