Mozart And The British Invasion 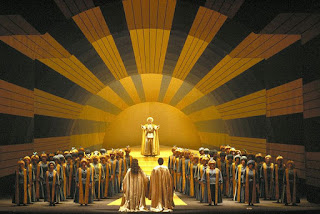 In my previous two blog posts; Aleister Crowley And TheBritish Invasion and
Aleister Crowley And The British Invasion Part Two, we examined the connect between Mr. Crowley and many British rock groups such as Led Zepelin and The Beatles who were, if not followers, certainly were familiar with his writings.
We showed how Mr. Crowley was involved with revealing the inner teachings of the Masons, which had traditionally been kept a secret.
Many things can be said about this but keeping knowledge a secret is unquestionably one of the tools of the suppressors or those who wish to stay in power.
We find Mr. Crowley living outside the mores of society, taking drugs and having sexual relations quite freely, elements we find prevalent in the sixties. Unfortunately there was an end result of self-discovery that most people involved did not quite reach.
The vehicles of liberation became an end in themselves, got commercialized and the movement also got mixed up with the revolutionary ideas of Mao and the Red Guard.
But we had revolutions before, so these ideas are obviously not new, even though the commercial end of the movement would have you thing this was the hippest and newest thing under the sun and don’t trust anyone over thirty.
I remember watching something on the television having to do with how cool this all was and turning to my friend and saying ‘this is not new.’
Obviously, something before the French revolution had fanned the flames, so to speak, so I took a look.
I remembered finding a book of Mozart’s letter’s in a library back in high school and my friend John and I were shocked over their content. Once, in the elevator in music school, my violin teacher, completely out of the blue asked me what I thought Mozart was really like.
I said he made Jim Morrison look like Mr. Rogers. My violin teacher just smiled and said ‘good.’
And well, don’t you know that Mozart was a Mason as well and his opera the Magic Flute is, by all accounts about Masonry and full of Masonic symbols.
Interesting that Wikipedia’s article talks about two main sects or orders of the Masons; one enlightened and the other more mystic and occult. Mozart was part of the enlightened group that studied the teachings of Rousseau and Diderot. Said teachings debunked the idea that the ruling class was somehow nobler in spirit, generally speaking.
The Magic Flute does have two characters in it that are kind of diametrically opposed; the Queen of the Night who is evil and Sarastro who is good. In a pdf on this opera from the
San Francisco Opera Education, the theory is put forward that the Queen of the Night is the empress Maria Theresa and the hero Tamino is the good emperor Joseph.