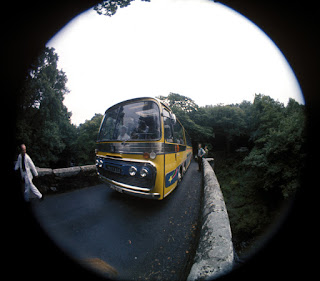 Greetings!
We’re all having a wonderful time!
Well… Actually I didn’t get on the bus until it was already quite late, somewhere around Baltimore. And most of the people who did get on the bus had already gotten off.
They got off somewhere around Topanga and became lawyers, at least this is what Bob told me.
Then there were quite a number of people who missed the bus all together. Quite a lot, I understand.
Anyway, it got to Baltimore and they said ‘Roll up!’ which is British for get in line, only there wasn’t any line at that time so I got right on.
I’ve been having a much better time since I gave up the idea that I was the driver.
You see, I thought I was the driver for quite a long time!
This came about, you see, because one day I just decided to pop up and talk to Buster and see if he really knew where we were going. You remember Buster, Buster Bloodvessel, yeah that’s the one. He thought he was the driver.
Only when I went up to see old Buster, I found out that he was dead! Finally busted that blood vessel, I guessed, and he had been dead for quite a long time.
Well, under the circumstances, I decided that something had to be done, so I pulled the bus over and stopped. This was somewhere in the Tulgy Woods.
So we pulled Buster out and buried him in the woods there and then I decided to drive the bus because who ever heard of a bus that drove itself?
Bob tried to warn me and said I would end up like Buster. He said it didn’t matter how the bus got there because it always arrived.
Well I tried driving the bus for such a long time, thinking someone had to get everyone wherever it was they were going but do you know, no matter how I tried, we never once ended up where I thought we would!
Yes, I became worked up and frustrated and overwrought until I finally gave up and went back to where the other passengers were, just sitting around partying and having a good old time.
Bob played his guitar a lot, which, if it was anyone else, might be annoying, but the man knows so many songs! He hardly ever repeats one. Do you know he still remembers his entire repertoire of Arlo Guthrie songs? Then he just makes up a new one almost everyday.
So I’ve learned to relax and enjoy the ride because, one thing I’ve realized is, one destination is like another: wonderful!
And the reason for that is:
“There’s nowhere you can be
That isn’t where you’re meant to be.
It’s easy!
All you need is love!”
(Rat ta tatatat.)